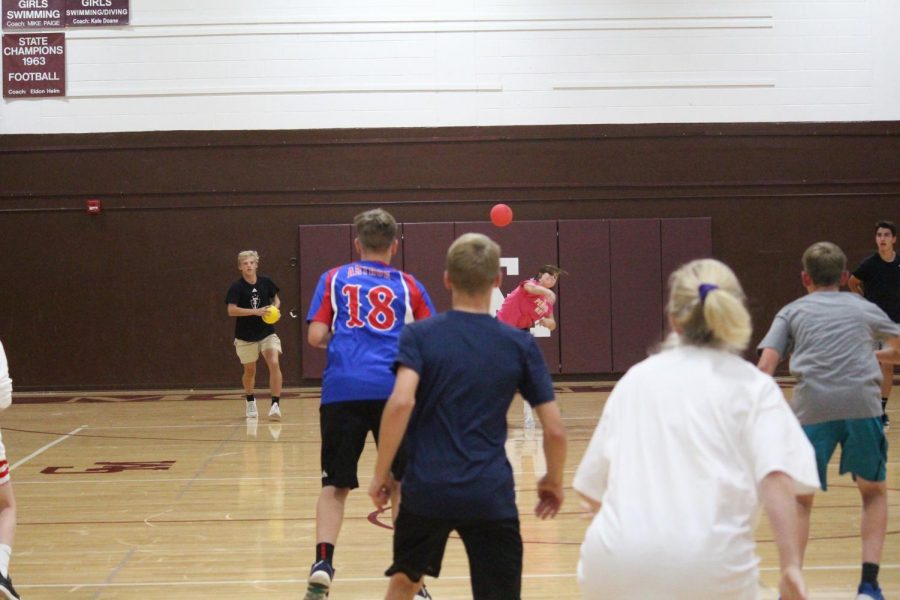 Perhaps the most famous line from the film Dodgeball, A True Underdog Story, was uttered by coach, Patches O’Houlihan. He said, “If you can dodge a wrench, you can dodge a ball.”

Ok, that may be a little dramatic, especially since most of us know that dodgeball isn’t a serious sport. The irony of the film is how serious Ben Stiller’s character takes the game and how nobody else cares. And there’s a lesson to be learned – bigger isn’t always better.

But there are certainly people who care, DECA. It might not be the most lucrative as a fundraiser. But there’s the lesson again. It doesn’t have to be serious, and it’s a fantastic start to homecoming and it’s still stuck around for its fun.

As part of the annual homecoming week festivities, DECA hosts a dodgeball tournament to raise money for the program. According to the DECA teacher,  Mr.Roberts, the tournament was started by a former DECA student years ago after viewing Dodgeball, and thought it was a great idea for a fundraiser.

At the height of its popularity years ago, these dodgeball tournaments were so successful that DECA hosted two a year – one in the fall and one in spring – drawing large crowds every time. While as a fundraiser, it doesn’t typically make a significant amount of money. It still manages to draw in around 70 people and it’s all about fun anyway. So, DECA decided to keep the tradition around.

The funds raised primarily go to their higher level competitions, specifically the state competition at the Broadmoor. The competitions hold 37 different events, including entrepreneurship, management of a multitude of different kinds of businesses, but primarily marketing.

The DECA program teaches a variety of skills for all careers, like public speaking, problem-solving, and all kinds of business abilities. But most of all it is about marketing, which sounds niche, but according to Mr.Roberts is applicable to almost everyone.

The students in the program really enjoy it, too. Second year DECA student, Jack Irgens, stated, “It’s the most practical business class, other classes like it just give you terms to memorize.” “Moreover, I just really like the community around it, it’s great to have that kind of community in school.”

If you have any interest in this kind of class, you should consider joining or at least go out to support them.