Senior and Junior girls face off in PowderPuff Game. 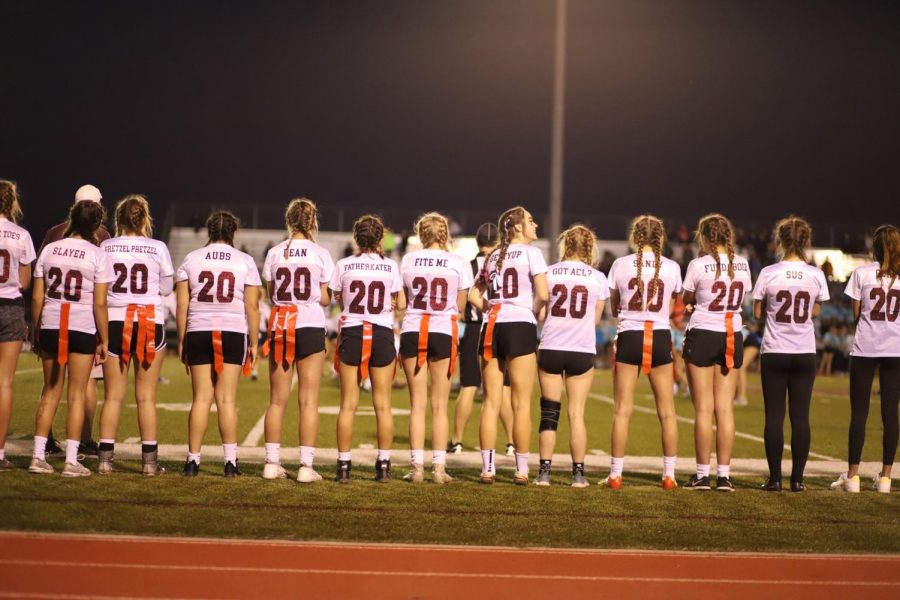 Blue and maroon nails, french braids, and tough as acrylics. Not your typical football team. However, it is for the Cheyenne Mountain Powerpuff girls.

On Wednesday, October 2, the senior girls faced the juniors girls for the annual PowderPuff game on the Cheyenne Mountain turf. All the girls gave 100 percent in the game and both teams and the fans who came to watch had a good time.

Junior Maren Monticelli said, “The best part of being on the team was probably getting to know a lot more people and seeing how athletic and dedicated was everyone to winning.”

A rare opportunity to practice the sport, Powderpuff provides a great way to meet new people and build friendships. The quarterbacks, senior Bella Zanotelli and junior Lauren Murray, formed bonds with their running backs and the blockers on the line of scrimmage learned sportsmanship. The game is also a chance to spend time with friends or to enjoy the always appropriated half-time dance performance provided by the boy cheerleaders.

A lot of girls have been looking forward to this event since freshman year and expressed their desire to be a part of the Cheyenne tradition. Both coaches and players participated in this event and were confident in their teams.

The Seniors won. The two Junior touchdowns were not enough to beat them. One junior was injured, many different plays were run and flags were pulled. The final score was seniors 30 to juniors 12.

Junior Brenna Sanchez stated, “I think if the flags were the same, we definitely would have won.”

The differences in flags may have contributed to the loss of the juniors. Yet, both juniors and seniors had fun and will remember this one of a kind experience for a long time.